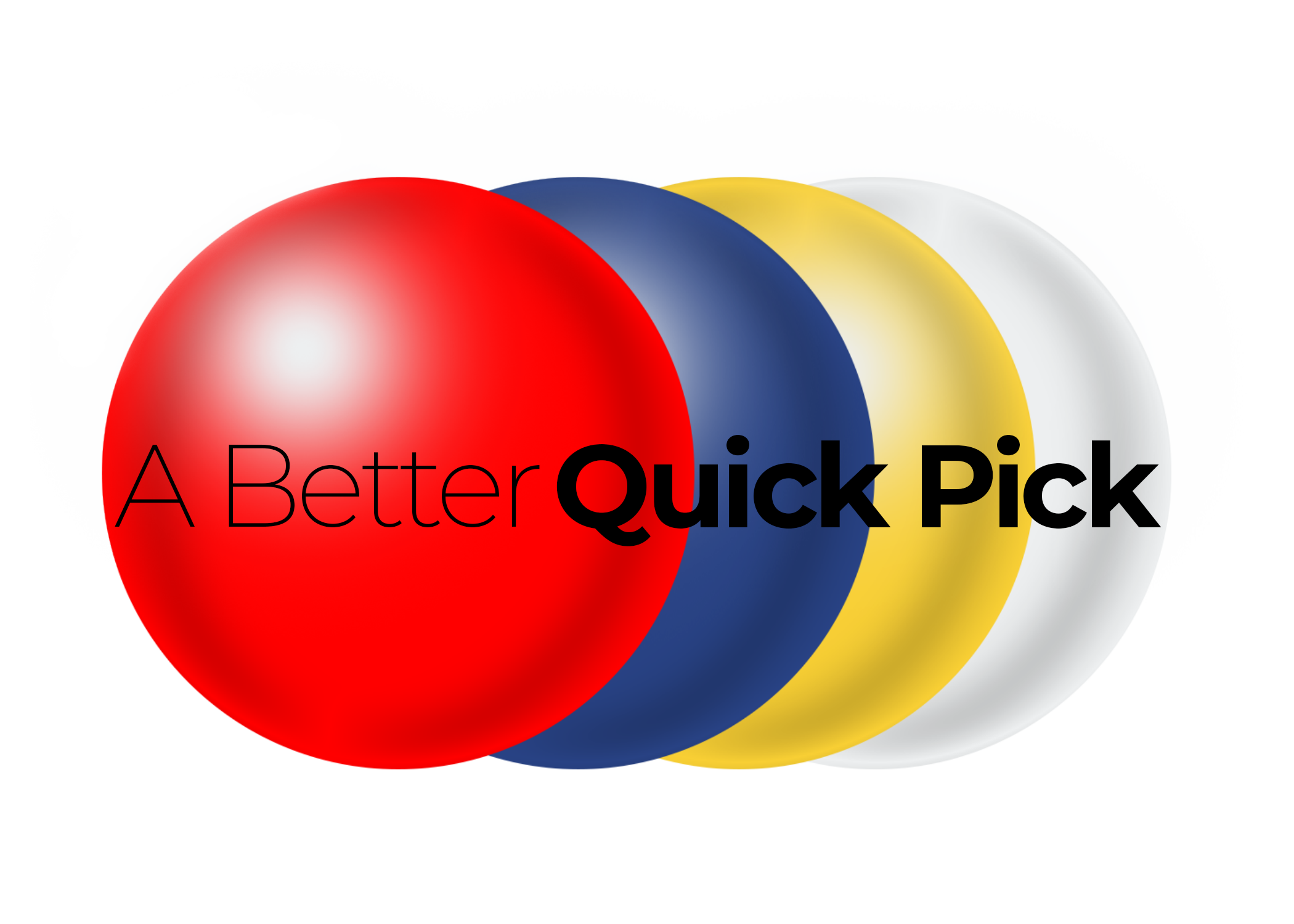 A Not So Random Number Generator For Powerball & Mega Millions Lotteries

I couldn't believe it. Well, I do believe it but lets just say I was stunned and pretty damn excited. Before I get to what excited me so much let me provide you with the backstory of how I built A Better Quick Pick for my wife a few years ago. She would periodically play Powerball and Mega Millions and would always just check the box to let the lottery system generate her picks for her, and NEVER have any luck whatsoever.

So I said to my wife, look I'm a web developer and also not too bad at math so why don't I create a web app to generate better picks for you and increase your odds of at least hitting some numbers. My thought was to build a web app where she could pull out her phone, click the shortcut icon on her home screen and easily generate better numbers to use.

By figuring out what the hot and cold Powerball and Mega Millions winning numbers are I was able to significantly reduce the pool of numbers that I would use to generate potential winning numbers. These numbers are not necessarily aimed at winning the Powerball Grand Prize or Mega Millions Jackpot, but rather geared towards providing consistently better numbers to increase your odds of winning smaller prizes.

Ok got it? Now lets fast forward to today and why I was so excited. Truth be told I haven't looked at my app or played Powerball and Mega Millions in quite a few months. I guess like most people I forget about it until the Powerball or Mega Millions jackpots reach well into the hundreds of millions of dollars, and then suddenly it's on my radar again. I know I can hear you saying "So $10,000,000 is not good enough for you?".

So, I opened up my app and noticed that there must have been a bug in my code. I tried to open up the Mega Millions historical data page and it crashed when I clicked on a date from last month. I needed to figure out why this was happening, so I opened up my code and tried to replicate the error again while looking at my logs and noticed that I had a spelling mistake, ugh. It was a simple enough fix so once I fixed the mistake I refreshed the page and low and behold it showed the max potential winnings for that drawing was the Mega Millions Jackpot!

I decided to go thru the historical data over the past month and I discovered that I missed out on potentially winning over $300,000,000. THREE. HUNDRED. MILLION. DOLLARS.! I started taking screenshots of the potential winnings.

Dec 7, 2020 estimated Mega Millions jackpot was $264 million, with no winner. We really had a chance here as every number that was drawn were all numbers contained in my much smaller pool of numbers. 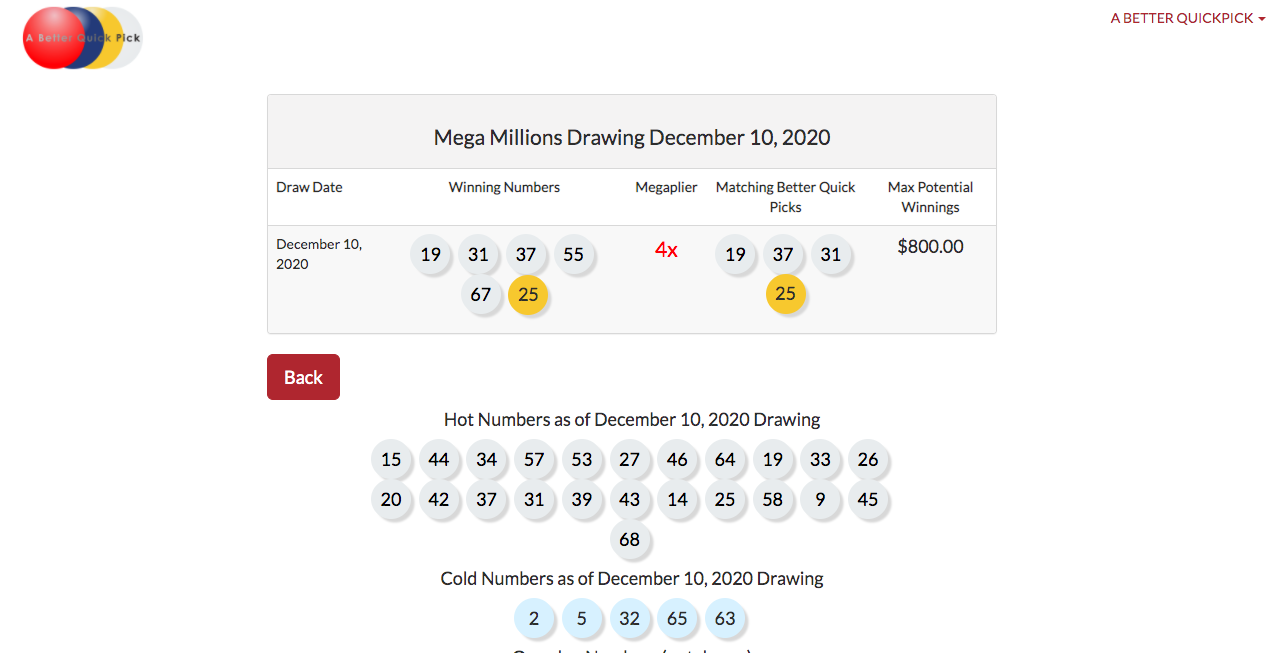 Dec 15th estimated Mega Millions jackpot of $291 million and once again no winner, however my pool of numbers contained each of the winning drawn Mega Millions numbers and mega ball. 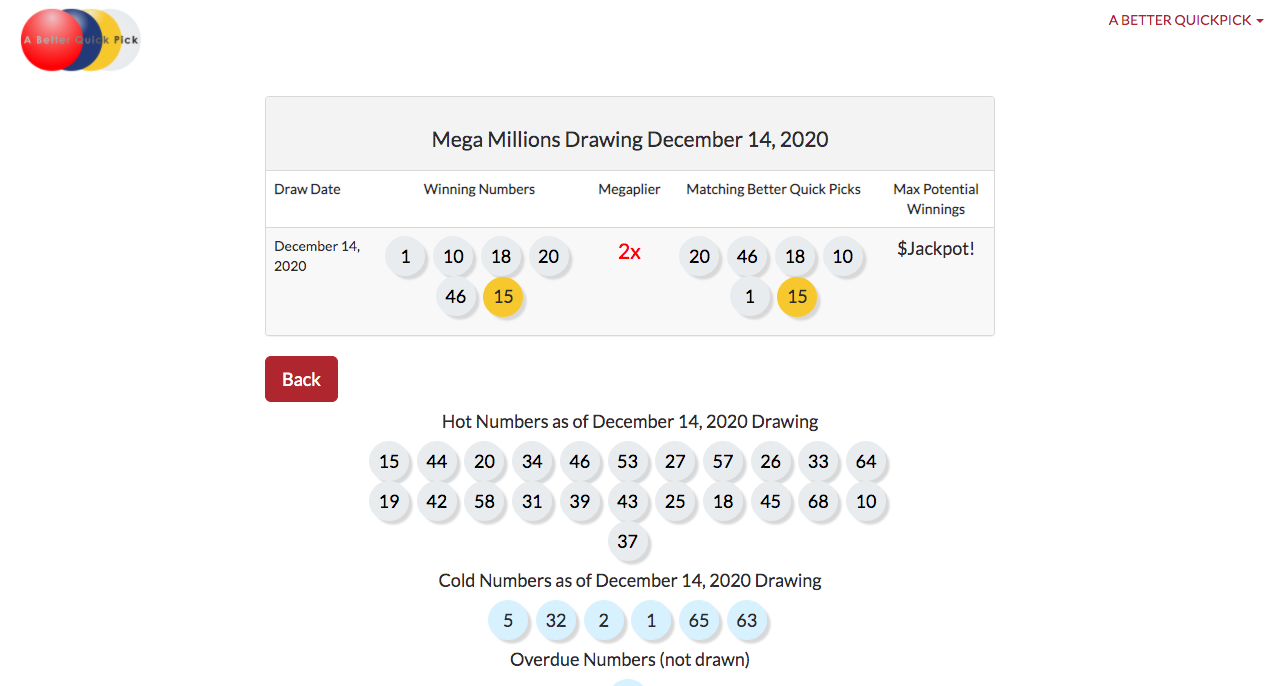 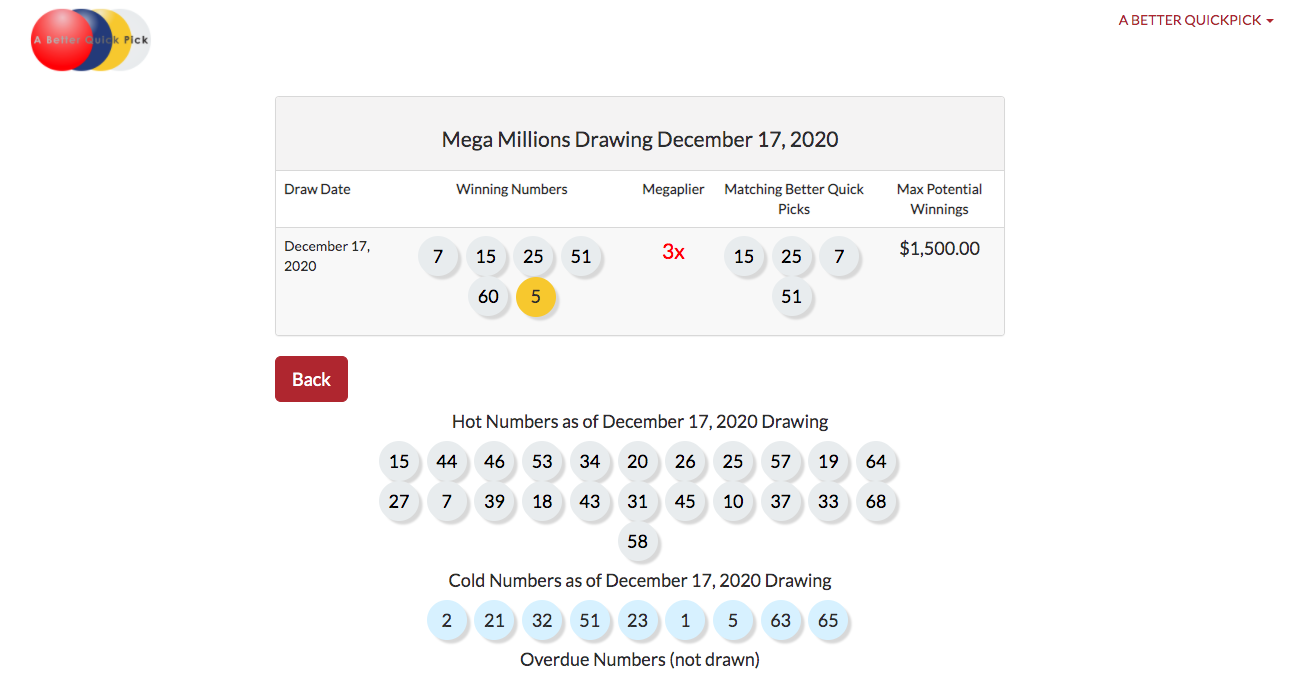 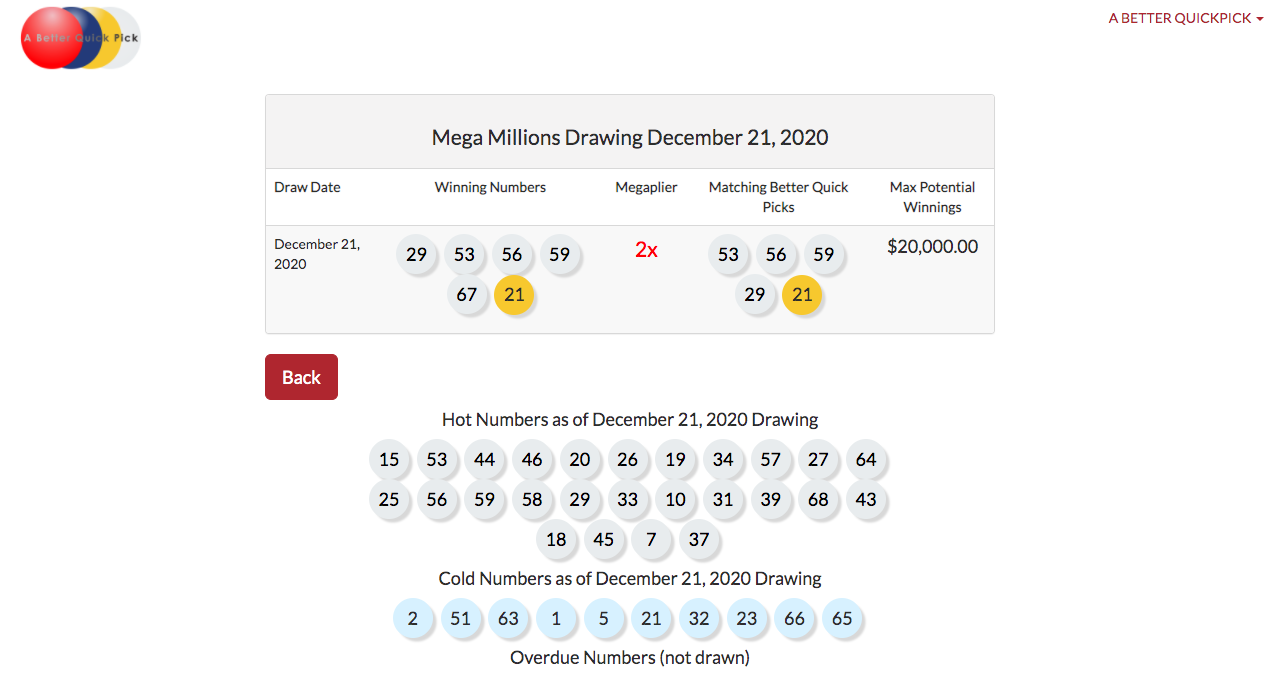 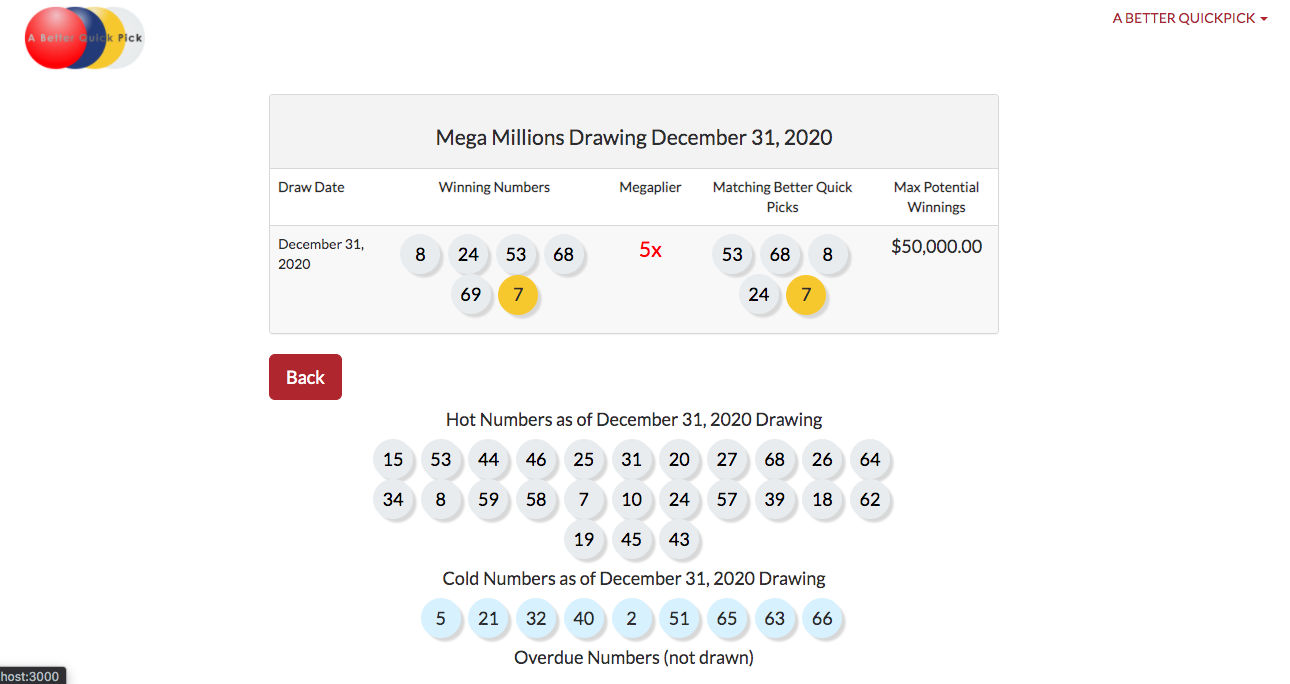 And then for the Powerball winning numbers we lost out on a potential $2,150,000

So, why am I showing you all this since I didn't win? I'm showing you this to demonstrate that by reducing the pool of Mega Millions numbers of 70 white balls and 25 gold Mega Balls to only using numbers that exceed a certain percentage of being drawn in previous drawings (over a defined period of time) that are determined to be either hot or cold. You can see in the screenshots that the pool of hot and cold numbers fluctuates from drawing to drawing based on my algorithm. However, wouldn't you rather choose from a pool of 22 white balls and then maybe 8-10 gold mega balls verus 70 and 25 respectively?

The same theory applies to the pool of Powerball numbers of 69 white balls and 26 red Powerballs to significanly reduce the pool of numbers and give you a statistically higher probability of hitting those numbers.

If you find A Better Quick Pick useful and would like to support the ongoing development, buy me a coffee, or become a sponsor!
Follow

Play Responsibly
Powerball® and Mega Millions® are registered trademarks and not affiliated with A Better Quick Pick.